After my last posting, I took a break, ran into some real work projects (thanks, guys!), came down with bronchitis and then slammed into Christmas. So I have been a little tardy with my blogging. If you were having cold sweats about me not writing another article, fear not, there’s more to come (scary, huh?). After beginning this post at the end of November, it’s now the beginning of January (I’m embarrassed to say), so I hope you all have a great 2007.

As luck would have it, I have recently experienced mouse failure. Wow! A chance to do more research that I can pass on to (both of) my readers. So here goes.

I have been a Kensington mouse guy for years and years. I loved the TurboMouse trackball I used on my older, ADB-equipped Macs. Sturdy, smooth-scrolling, programmable, easy on the hand. Then came the PowerMacs and USB. No more ADB ports, no more trackball. Whaaa! I wasn’t going to plunk down another $100 for a USB version or try one of those adapter thingys, so I coasted a while with the supplied Apple mouse.

But I was unsatisfied. I wanted multiple buttons (at least two!) and with the advent of OS X, two-button mice are not just nice, they are a necessity. Who in their right mind wants to use two hands to perform a right mouse click? So I turned back to my old friends at Kensington and found the Optical Mouse Elite. Great warranty. I know, I had to replace it about 3 years later. Now on my second one, and it finally gave up the ghost after faithful service.

(Update: I emailed Kensington and asked about the warranty, which had run out. They asked for my shipping address and sent me a brand spankin’ new 800 dpi mouse for free! Now that is customer support! I wasn’t really planning on that so I had already ordered my replacement mouse. So now I have two! Ok, back to the regularly scheduled blog…)

Times have changed. We have moved from mechanical mice, to optical mice, to laser mice and beyond. So where do I begin? Well, I started with the top 4 best-known companies that make mice – Apple, Microsoft, Kensington and Logitech. Then I decided whether to go wired or wireless. Easy decision there since I am at my desk, and have the space and ports, wired is the way to go and is cheaper than going wireless (not to mention more environmentally friendly).

Here’s where I digress into the realm of tech specs. The quality of a mouse is measured in several ways, one of the most common and understandable is the resolution. Much like a monitor, printer or scanner, the higher the number the finer or more precise the device is. Mechanical mice labored to be precise at 100-200 dpi, the problem being dust, hand oils and wear. Then came optical mice which made for lighter, more accurate mice in the 400–600 dpi range. Laser mice are now the next thing with resolutions going from 800–1,600 dpi and higher. Apple’s mice are still optical and that isn’t bad. That technology will work for most people. If you are into drafting, CAD, design, or gaming, you may want to consider the laser mice. They aren’t much more expensive (if at all) than the opticals put out by the “known” companies. Razer|Pro uses infrared tech in their mice. 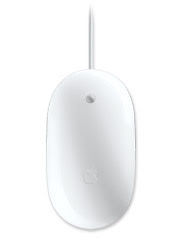 Apple, of course, has the Mighty Mouse in tailed (wired) and tail-less models. It now ships with every new Mac (Although they disguise it as a single-button mouse and even preset the software to work as a single-button-on-top mouse, silly people. Geesh, they are as stubborn about upgrading as some of my clients!). It sports 5 buttons, two on top on either side of the scroll ball, one on either side of the mouse and the scroll ball also doubles as a button. Apple has a great team of designers and the MM is a good example of their skill. There are no breaks on the top to indicate buttons, which is cool, but could be confusing to new users of multi-button mice or older users used to a single button. Some people may find the omni-directional scrolling ball too small, but it works great. The big issue is with the side buttons, which are hard to press. For gaming they would be pretty much useless. The software is built right into OS X, so it can be programmed right out of the box, and you will want to do that immediately to make the right button a right-click. At $49 and $69 each respectively, it might serve for my daily desktop mousing functions, but I’m a gamer, too, so I want higher precision, better button response and more programmability.

Both Logitech and Kensington offer that, with the edge I think to Logitech for software. Kensington’s MouseWorks software isn’t bad, just isn’t as full-featured as their OS 9 version. They made it a point to say that they are continuing to develop it, but c’mon guys, you think after 5 years you could catch up? 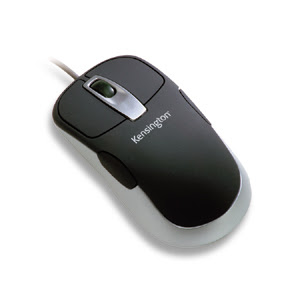 I had been using a Kensington Optical Elite for years, but it wasn’t their top of the line model. Even so, it’s response is decent in games, and was used to the way it worked. It, too, has 5 buttons in the same locations as the Mighty Mouse, though it doesn’t attempt to hide the top buttons and uses a more typical scroll wheel rather than a ball. The side buttons work much better than the MM. You can even “chord” mouse clicks, that is press two buttons together to get another command, but only with the MouseWorks software. Even though the Optical Elite has five-button goodness, it harbors a small lack in programmability that I had to enhance with Alessandro Levi Montalcini’s USB Overdrive, in order for it to work with TeamSpeex. I checked with their tech support and even using the newest version, and they still have not gotten around to being able to map function keys to the mouse buttons in their software. Kensington, your hardware is great, but get with the software times, baby! Why should I have to shell out another $20 to add functionality that should already be there?

Logitech was another possibility, but since I am not a paid reviewer, I can’t just order a bunch of mice and try them all (companies, please feel free to send me yours for review…) So I had an older Logitech from another computer hanging around and I installed the software to check it out. Seemed to be pretty good, but I had to start comparing performance and feature specs because I didn’t have them in person to try out, so sad to say, I was never really able to test a newer Logitech out.

As for Microsoft, well, you know… they may have a decent product and software, but it just doesn’t feel right plugging an IntelliMouse into a Mac, ya know? It might be mean and unfair, but heck, it’s my blog!

I checked reviews and ads in MacWorld and MacAddict, as well as on MacMall.com and GoGamer.com for other companies and found two other contenders I hadn’t heard of before. MacMice and Razer|Pro Solutions. 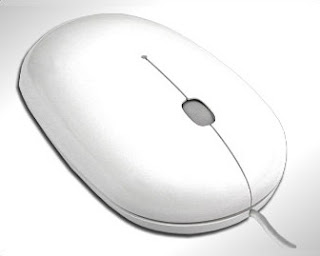 MacMice seems to have the third party solution to Apple’s Mighty Mouse, just at a lower price point. The Danger Mouse looks good, the reviews were positive and it’s the only mouse that comes in white, black or [Red] which is not only cool, but helps grow a major orphan assistance program in Africa. However, it doesn’t offer side buttons and the programmability that I was looking for. For a regular desktop mouse or upgrade from a single-button mouse, it’s a no-brainer. $30 gets you 1,600 dpi resolution via laser and multi-button functionality, or $70 for the wireless version. Sweet!

Razer|Pro Solutions Ok, I want to confess. I’m a sucker for cool stuff. This is the definition of cool for me. Manta-like design, blue glowing scroll wheel and side panels, reputation for being a gamer’s mouse, high-precision and great drivers – it’s all here with the Pro|Click 1.6. If you haven’t figured it out by now, I bought it. You can switch resolutions between 400 and 1,600 dpi on the fly, adjust sensitivity of the movement and the scroll wheel and it has 7 programmable buttons. After about a month, the post-marital glow has faded and has given me some perspective. In games, the mouse works great, but takes time to adjust the settings both in and out of game to make it work best. The side buttons are somewhat awkwardly placed for my hand and reduces my ability to use them in games. The scroll wheel in normal use seems not have a 1-1 response, that is, you have to sometimes move it additional “clicks” to get it to scroll a page. And, doh!, you can’t map a function key to a button or even have separate application settings. Lastly, I needed to upgrade immediately to the 1.6.6 version of the software in order to use it with OS X 10.4.8 But all-in-all I think it was a decent purchase for $32.90. 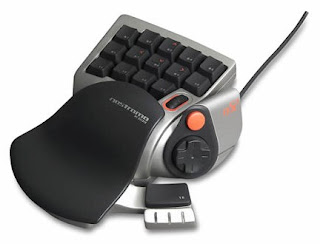 Wrap up time. If you recently purchased a new Mac, check out the Mighty Mouse and it’s driver in the System Preferences, you’ll be happy you did. Looking to upgrade from a single-button for cheap? The Danger Mouse gets the nod. Want to get into the game? Look at the multitude of offerings from Kensington, Logitech, Microsoft and Razer|Pro Solutions. One last shot across the bow. If you’re looking for a custom gaming device, check out Belkin’s Nostromo SpeedPad N52, it puts all the typical gaming keys at one-hand’s fingertips.