I Am the Night

It’s no secret… I got a new office chair.

After at least 10 years, probably more since I can’t find the receipt, I decided to get a new chair for my office. I was inspired by web window shopping and seeing all the YouTube bloggers decked out with what they call “racing chairs” – gaming chairs tricked out like a formula one car seat.

Now I am not one to simply buy for fashion (well maybe a little), but I was looking for a few specific things. Comfort, support, durability, adjustability. I have taken the occasional power nap in my chair and it’s not bad with my feet up on my desk. Long hours in the chair is not unlike long hours on my bike – it gets uncomfortable. And my old Staples $100 (or less I can’t remember) chair was just not cutting it anymore.

Oh, the curse of due diligence. I looked at racing chairs, I looked at office chairs, I compared features, warranties, prices, and performance. I used Honey and CamelCamelCamel to monitor prices on Amazon, I checked out manufacturer sites, I polled my friends. I created a spreadsheet. Here is a list of common features to look for:

Most reviewers and friends who responded mentioned Steelcase and Herman Miller. Those chairs used start at $500-$600. New they are about double or more depending on the model and features. Most of the racing chairs were in the sub $200 range. What am I missing here? Is there such a disparity between features, materials and build quality? I started looking closer at the reviews and comments and for the less expensive chairs, they were all over the map – frame cracks, missing pieces, broken pieces, impossible to assemble, material too hard, material wears out, etc. Of course, these are the bad reviews, there were plenty of people who liked the chairs they bought.

I began to see a number of people espousing Secret Lab’s products, the Omega and Titan chairs. Billed as gaming chairs yes, but built tough enough for office use. They have a huge following. However they run about $400, depending on the model and design choices (more for actual leather). And there is a significant lead time (like a month or more). People were actually in a queue to purchase them. Ok, I thought, that means what – their marketing was great (as it happens, it was)?

I read up on their construction, the testing involved, the warranty (3 years, +2 if you post a pic on Twitter), the thousands of positive comments. Also, gosh darn it, they are cool looking, less gaudy than some of the racing chairs yet way more stylish than the high-end office chairs, with many of the same features.

And they had a Batman-inspired chair design.

Here I have to stop and thank Mike from VR Oasis for suggesting I go with the Titan with its slightly larger, less bucket type seat, and with the internal lumbar adjustment over the pillow that comes with the Omega line. He’s a skinny guy and said he had just wanted a little more room, which made me think, if he needs more room, I certainly would.

Yes, that’s right. I ordered one. And after a long, long wait, it arrived yesterday. I wish I had the foresight to take pictures of the unboxing and setup, because you would have been just as impressed as I was. But I hope these photos will do some justice to how it was prepped and promoted. 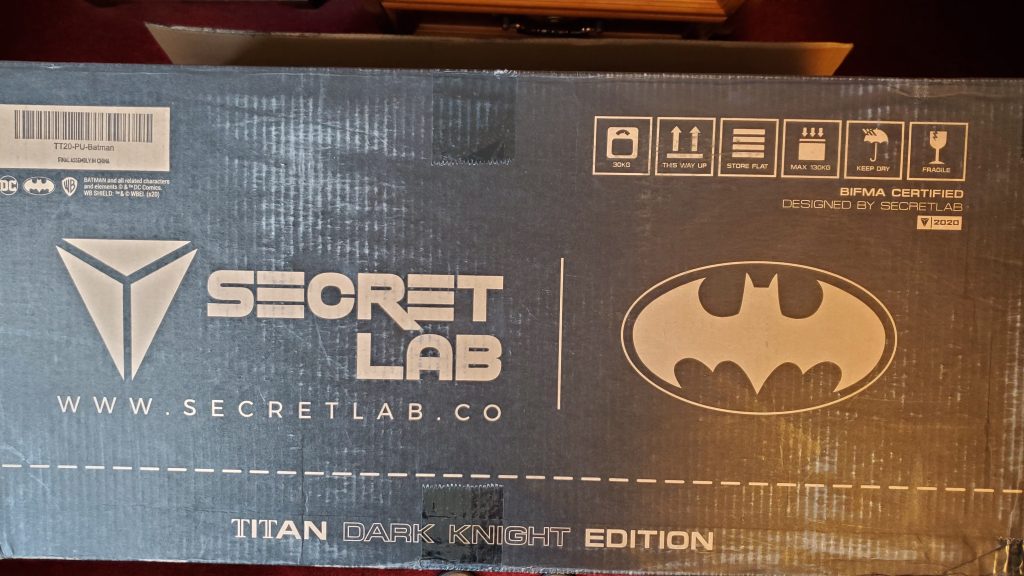 I have to admit with feeling a little sheepish when the Fedex delivery man came to the door with a box that bore the Batman insignia on it as well as the Secret Lab logo. Wow, even the outer box was custom. And that was only the start. 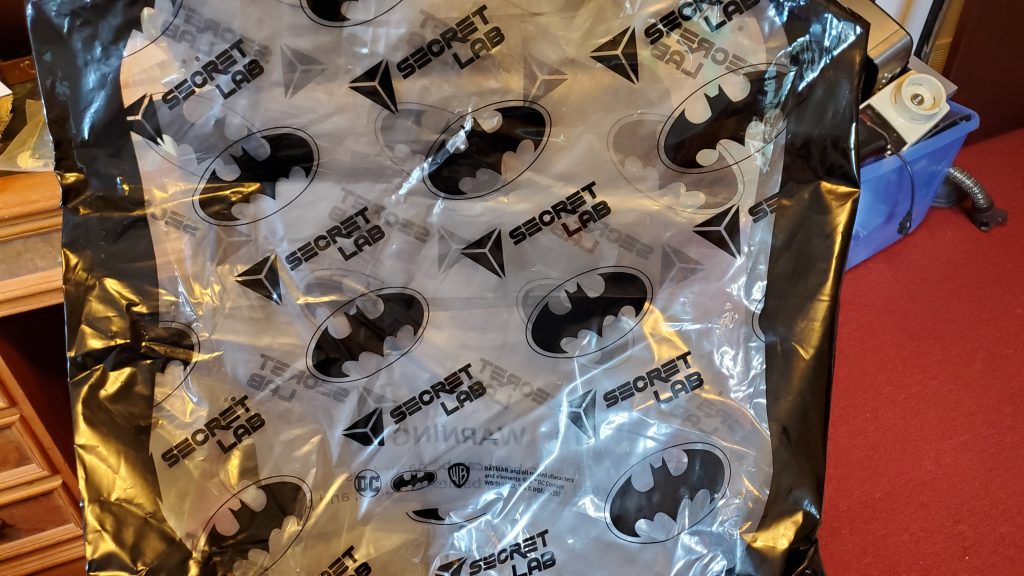 Even the backrest was covered with custom plastic wrapping. 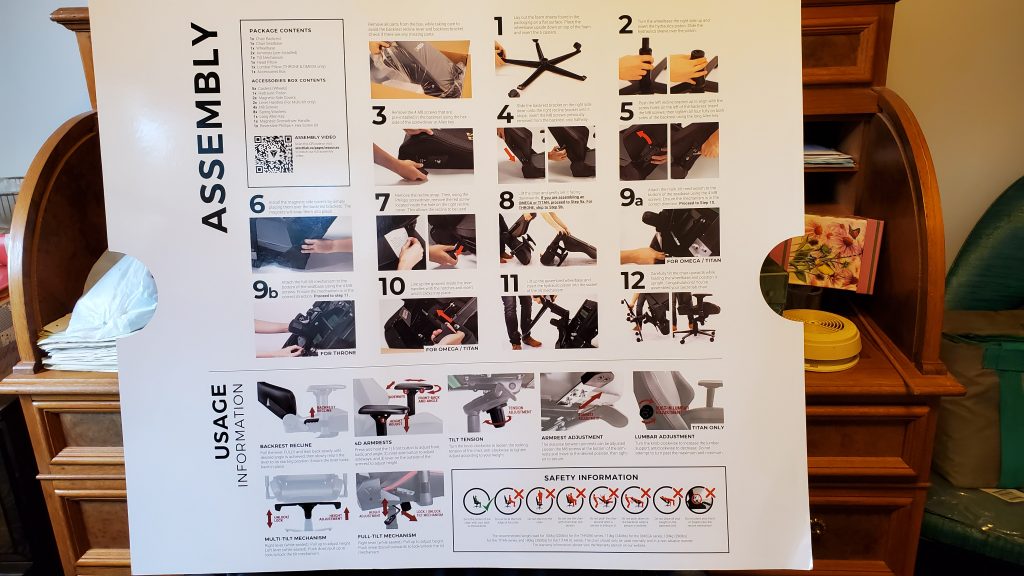 The box contained a gigantic, laminated card with a welcome/inspected by on one side and a step by step assembly guide with photos on the other. The box also contained foam pads used for both protecting the items inside and to use when assembling the components of the chair. 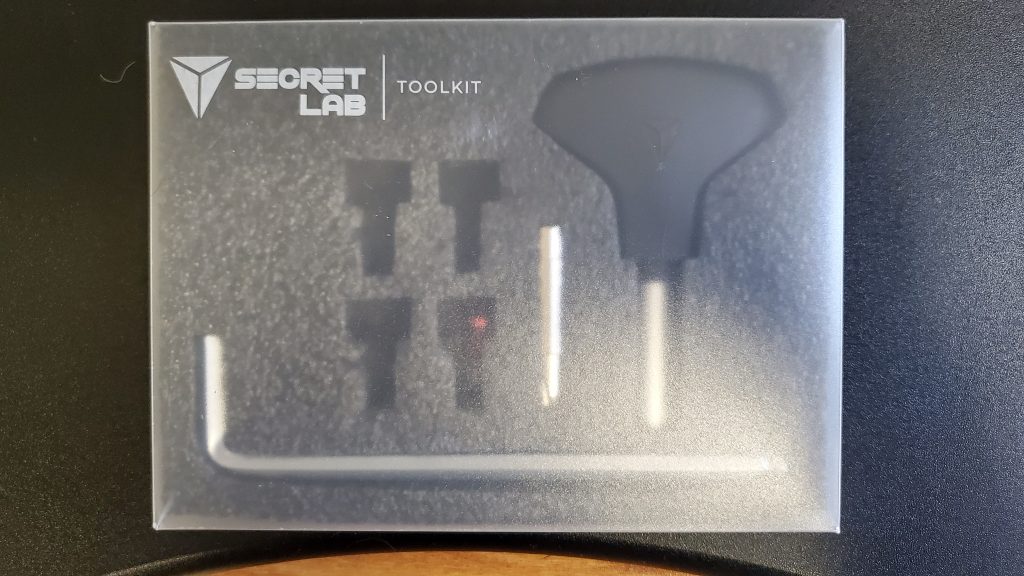 A nifty Secret Lab Toolkit in its own plastic case, also a place to store the bolts to assemble part of the chair. The screwdriver is magnetic as well. Mustache hair not included. 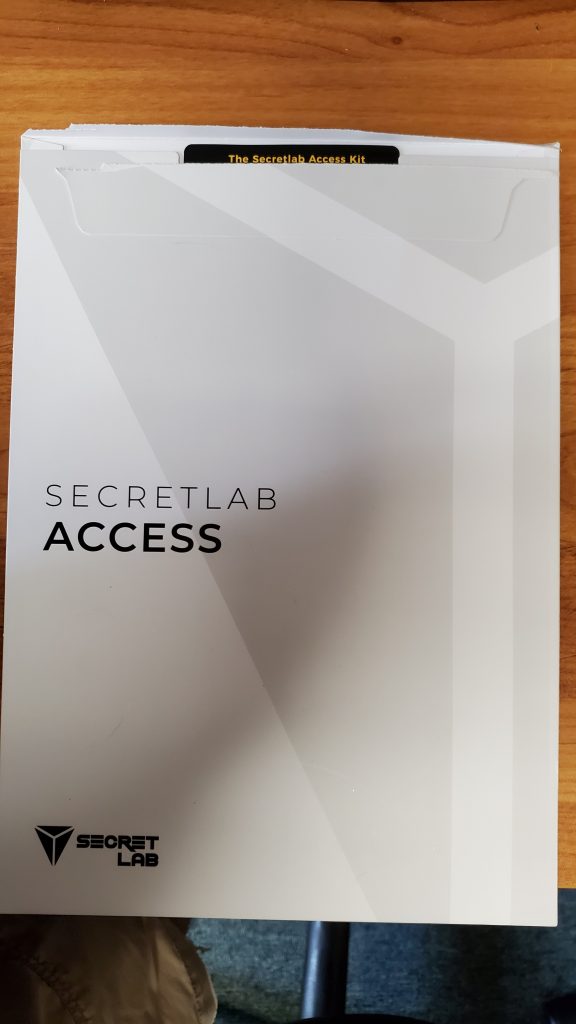 Secret Lab file folder – pull tab to reveal the filename (who thinks of this stuff)? Outer envelope and inner page work together to make it look like a tabbed file, clever!

Time to assemble was under an hour. The directions say it’s better with two people but I had no issues assembling the chair by myself. I mean c’mon, would Batman ask for help?

And here is the assembled chair. Now add a gaming rig, headphones, Quest VR headset, and a custom Bat computer-like theme for my desktop and I am ready to take back Gotham!

I bet you’re asking, “That’s all very nice, but how does it feel?” Well, I have only had it two days. But here’s my take. The cushion is not squishy like a couch. It’s dense cold foam material and I think it will take some time to break in, but at the moment I don’t think it’s uncomfortable. And I am playing with the tilt adjustment and rocking resistance. But overall, I’m happy with it. The acid test will be when I take my next power nap.

What about you? Have you taken the plunge and invested in a good chair for work or gaming? What did you end up with? Were you happy in the end? Literally? LOL Let me know.