Who Framed Roger Rabbit? I did! 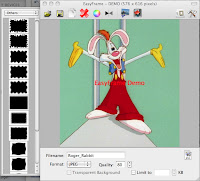 As I mentioned in the previous post, I thought I would be comparing two competing image framing products. But after looking a little closer, found that they approached the subject in two very distinct ways, and in fact could both be weapons sitting side-by-side in the designer’s arsenal. Today, we’re going to look at the second of these two apps, EasyFrame from Yellow Mug software. The name and even the icon for the app are somewhat disingenuous. We aren’t really dealing with frames here, but with edge effects. You accomplish this by applying a greyscale mask to an existing image, basically applying the look of the mask to the edge of your image. And EasyFrame is a as easy to use as its name implies. 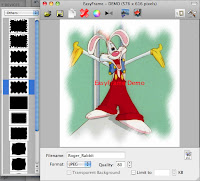 The bare-bones interface minimizes the intrusion of the software on your creativity. The drawer on the left holds the thumbnail list of frames and a popup list of categories (both built-in and user-specified), which you can drag open and shut. The addition of a drawer button that toggles that function would be nice. The buttons along the top lack a certain design coherence, but they get the job done.

Everything is drag and drop. Drop an image into the main window, drop new frames into the frame drawer, even right from a web page! That’s pretty dang convenient right there. Select a frame category, click a frame and presto, you’ve framed your image. Export controls are right below the image, readily at hand, simply drag the image icon on the bottom right to your desktop or into your application and you’re done. 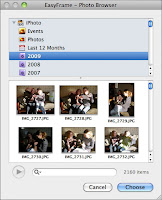 EasyFrame has its own Photo Browser (sadly only displays iPhoto images) and it also works with the iMedia Browser from Karelia. The app comes with many built-in frames, but a link on their website provides you with more than 125 free greyscale masks that you can drop right into the program. Here is the link:

There are but a few items on the downside to mention that mar the otherwise well thought out program. When switching from one set of frames to the next, you lose the current frame applied, which I find a little annoying, especially when trying to compare frame selections. And while being able to see thumbnails of the selections, you really can’t tell how the frame will look until applied, so some way of comparing frames would be nice. A thought would be to implement a back button feature, which maintains a history of frames you have used in the current session, just like a web browser. Or the method I suggested in last weeks article. 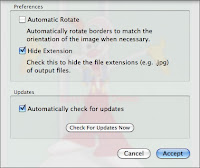 When flipping the border horizontally, I seem to lose the image. When I flip back, all is well. If I try export the flipped image, I just get the frame. This happens with both built-in and custom frames. And you can’t rotate a border, which you can sort of do using the auto-rotate feature, but that just orients the border based on the dimensions of the image, not on the subject of the image and sometimes doesn’t work the way you wish. Another border feature wish would be to be able to grow and shrink the border. Sometimes the border overlaps too much of the subject and there is no way to adjust it.

Drag and drop doesn’t always work with web page thumbnails, unless they are just scaled versions of the full size. But the full-sized ones work fine. Alas, there is no batch feature, so unless you are comfortable with Automator or QuicKeys, then you have to process your images one-by-one. Quitting the program doesn’t ask you if you want to save your image first, you decide if that’s a good thing or not. Since it’s fairly easy to recreate an image, I could go either way.

The price is a scant $14.95, which easily puts it into the hands of home hobbyists and professionals alike. It can also work in concert with two of Yellow Mug’s other software products, EasyCrop and FileChute for use with image cropping and uploading to your favorite internet site. In fact, you can get the whole kit and caboodle of Yellow Mug’s nine products for only $39.95, the cost of ImageFramer alone. The demo is fully functional, only applying a watermark to your image. Try it out.

Conclusion? As I stated earlier, it was never a competition. These programs do different things and it might behoove you to be aware that both are available. I am still hoping for a drop in the cost of ImageFramer, even though it does more and is more polished than EasyFrame, but on the other hand, EasyFrame is simple and just plain works. Maybe it comes down to whether you want real frames or edge effects. Either way, both of these apps should fill the bill.