What is Tom Jones crooning about this week? Lion, the new Apple operating system, (10.7 if anyone is keeping track), hit the virtual shelves this week, and though Apple was very up front about it’s new features (and lack thereof), people were still caught off guard. I guess they didn’t watch the Keynote address at the WWDC or read any of the press releases. But I am here to set the record straight.

The major talking point is that this OS is an amalgam of OS X and iOS, Apple’s mobile OS. So there is greater support for multi-touch gestures either by trackpad, MagicMouse, or MagicPad and some of the look and feel in regard to program access and launching.

The biggest down side? Dropped support for Rosetta, Apple’s PowerPC emulator. Say goodbye to Microsoft Office 2004 and any of your other venerable PowerPC apps. One user put it “It may cost only $29.99, but will cost you thousands to upgrade.” That may be overstating it a bit. I mean c’mon, I think 7 seven years is long enough to wait between upgrades, but there may be some independent developers that haven’t leapt on the Intel boat (although most likely they probably switched first). But as Capt. Kirk would say, “I’d like to think that there are always possibilities.” Anyone using Office 2004 could move over to the free NeoOffice, OpenOffice or LibreOffice office suites. And there are options for almost any kind of app. True, they may not all be free, but they won’t set you back thousands, perhaps not even hundreds.

Another interesting item to note is that Lion is only available through the App Store. This means no waiting to purchase but depending on the speed of your network connection and the traffic on the App Store, it could be a long wait to download the 3GB+ installer. That also means no DVD, so you’ll need to download this onto each computer separately, though I heard rumors Apple was providing a way to store it on DVD. On an excellent note, Lion follows the App store guidelines and legally allows you to install copies on each machine you have an authorized user account on.

Reading through some of the user comments on the App Store, many people seem to genuinely like it. There are a few complaining about the loss of Rosetta, or the decreased performance. In general, assume it’s YMMV (Your Mileage May Vary). If you have a current Intel processor, at least 4GB of RAM and a decent hard drive, Lion should work at the minimum “ok” for you. It depends what kind of apps you have running both in the foreground and behind the scenes. And excellent way to check would be to launch the Activity Monitor found in the Applications –> Utility folder. That will give you a rundown on everything currently running on your computer and what is and is not compatible with Lion. 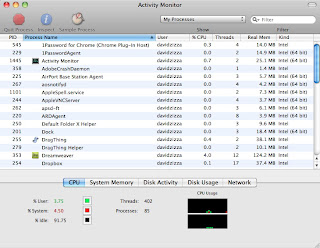 When you open it, you’ll see a display like the one above. Look at the far right column under “Kind.” Anything marked Intel or Intel (64 bit) is fine, anything marked PowerPC won’t run under Lion. Another way to check is to look at the System Profiler (Either from the Utility folder or from the More button in the About This Mac in the Apple menu), under the left selection Software. This inventories all the applications on your computer, running or not. 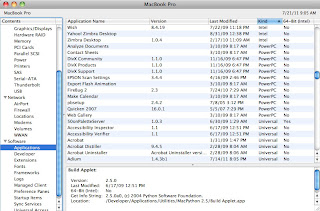 Move the columns to the right or open the window wide enough to see the Kind column again. You also might see “Universal” here which means it will run under PowerPC or Intel. Oh oh, got a few PowerPC apps here… No, not my Quicken 7!

I may download Lion onto my laptop and check it out. I am less concerned about compatibility issues here than I am with my desktop, I have way more apps on that system. But for now, on my main system…