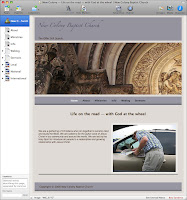 Finally, we come to the last installment of my Web Builder’s Review series. Today we are looking at Karelia Software’s Sandvox (SV), Apple Design Award’s 2007 runner up for the Best OS X User Experience. The folks at Karelia were kind enough to give me a temporary license key to allow me to test the full features of this app, for which I and my readers are grateful.

It appears at first blush that Sandvox and RapidWeaver (RW) were identical twins separated at birth. They both sport a similar interface that shows you the page list on the left, the current page on the right and an Inspector for many of the features with which the user can modify the pages. But upon closer inspection, you can see that they took different approaches to the user experience. RW works in Edit mode and allows you to Preview. In SV (as in iWeb), you edit in Preview mode. I like this approach better, especially for handling things like the sidebars, which are kind of a pain to edit in RW. In fact, it goes one step beyond either of the other apps by allowing you to edit the raw HTML (Pro version only), which seems to be one of the major drawbacks of this level of software. For someone like me, this is a necessity, for basic to moderate users, maybe not so much.

Another page building feature I like is their use of Collections, Pages, and Pagelets. Collections are basically folders for similar types of items, such as photos, blogs or lists. Pages give you a wide range of standard page types from text to photos to contact forms. The Pagelets cap it all off by giving little code “cheats” of popular features on many sites like counters, Digg list, Amazon list, Flickr badge, IM status and many more. If that isn’t enough for you, you can use the Code Inject feature to insert code common to every page in the site or use the Raw Edit feature to customize individual pages. One last thing is the ability to name every page and add individual keywords, which is nice for when you export, or if you decide to hand the site over to someone else who is using another app. 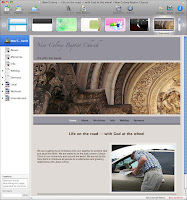 There is also a collapsable panel at the top showing you the various site designs. Coolness is in the details and it shows when you click the arrow to scroll through the designs. The angling of the icons is a nice touch. Still, it would be nice to be able to see all the thumbnails on a page rather than having to always scroll the entire list to find what you want. You can apply a new design to the site with one click of the mouse, just as in RW. SV comes with 37 designs and you can get 5 free by signing up for their email alerts. 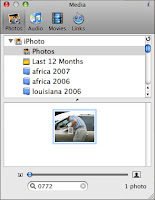 Another excellent feature is it’s iLife integration. It sports a Media Browser that allows you to drag and drop photos, movies and audio files on your pages from your iLife apps or from other locations on your drive. They also added the ability to do the same with web links. Karelia even makes this available as a free standalone app, so you can use it system-wide. That’s a nice touch. 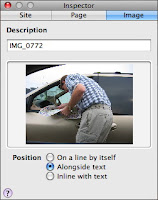 Picture handling was so-so, compared to iWeb but similar to RW. One annoying thing is that it seems to have done something funny to my opening image which didn’t appear in the other apps. You can check out the entire sample site here.

On the Info page I tried to create an iFrame for a Google Map, but was unable to get the map to come up by itself, I always ended up with the whole page which couldn’t display in a tiny window. I was able to accomplish this fine in RW.

Another issue is the use of the parent/child sidebar. It’s a good concept, being able to check a button that automatically uses the code from a parent page, but if the child page also has similar code, such as a link to an RSS feed, there then would be two of them on the same page, which was a little confusing to me so I know it would be confusing to less experienced users.

I couldn’t find a way to make bulleted lists other than typing the code in Raw mode, other than simply typing the text with numbers or bullets manually. That’s kind of odd. RW has a nice graphical shortcut list of common HTML stylings at the bottom of the page which is quite convenient.

As for the blog and podcast pages, it’s both simpler and more complicated than RW. In RW you have a list where you can view titles, add new items, delete items, etc. In SV, you have a Collection (folder) and within the Collection are pages, but with no centralized way of looking at them. And there are no pages specifically for podcasts, you just have to add text pages and then add a Movie pagelet to the sidebar or where ever. I don’t know maybe I am too used to the way it’s done in RW, but if you have a large number of these items, I think it would be harder to manage them this way. On a positive note, it appears that looking at the XML data, the date and time of the listings are posted, but not the length.

Ok, now for the summary. iWeb started it all, it’s free with new Macs, part of the impressive iLife collection that nets a bounch ‘o apps for short money, is completely integrated with the Mac and iTunes and it very easy to use. The downside is that it lacks the ability to edit the content of the pages, has too few Themes, is not extensible and caters to its own .Mac service.

Sandvox is impressive for its level of editabilty, user interface, greater number of Designs and Pagelet code snippets. The downside is it doesn’t exactly support podcast pages and is also not directly extensible.

For me, Rapidweaver gets the nod for the huge number of Themes, its ability to edit blogs and podcast in a central location, and its outstanding extensibility (there are plugins for virtually everything – most 3rd party themes and plugins cost money). But it’s not perfect either, with its Edit/Preview modes, no direct compatibility with iTunes RSS tags and its lack of dedicated support (saying that their developers are making better versions of RW and don’t have time to answer questions is not a plus for me).

Hope you found this useful and I apologize for taking so long to complete this series. Hopefully, I get some shorter reviews out there in the coming weeks.