Following close in the footsteps of iWeb, comes RealMacSoftware’s RapidWeaver (RW). The timing of this article (meaning I waited so long that this article…) coincided with the just-released version 4.0 of the company’s software, so that is the one I will be referring to. Version 4.0 is for Leopard users and 3.6 is for Tiger users. While tipping it’s hat to iWeb in several ways, the company has made strides of its own to distinguish itself from Apple’s product. Regularly priced at $79.95, it currently has a special promotion for $59.95, which is good for versions 3.6 and 4.0, current 3.6 owners can get the 4.0 upgrade for free, pre-3.6 users can upgrade for $30. And while normally the program costs as much as the entire iLife suite, it’s still a pittance compared to programs like Dreamweaver, GoLive (which is officially being abandoned by Adobe), and even Freeway Pro (Freeway Express is the same price). 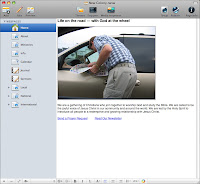 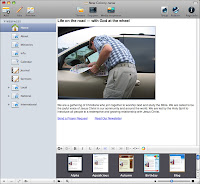 On to the product. When a file is first launched it appears similar to iWeb in layout. Pages on the left, content on the right, although it is not showing the page initially in Preview mode. In iWeb, you essentially work in preview mode. In RW, you work in Edit mode and can switch to Preview to view the results. Neither product allows you to work directly with the underlying code, but RW allows for a little more control, plus the wealth of addons accessible from their site cover pretty much all the things you would want to do from having CoverFlow (3rd-party) for viewing images, to injecting the site with Google Analytic code (built-in).

Text can be styled on the page using the familiar Text and Color palettes, links can be added as well as other HTML code, images can be inserted and formatted complete with borders and shadows, if desired. RW lacks iWeb’s image dragging and positioning, as well as the iPhoto-like image control, which does leave you a little wanting, but otherwise stands well on it’s own. The over 40 built-in templates (iWeb has 26) can be viewed in the main window and instantly applied to the entire site. You can’t apply them on an individual page basis like iWeb, but then again, why would you? Site design should be consistent. And speaking of which, if you don’t like the built in themes, you can access another 233 more (as of this writing) from multiple vendors directly from their website. Or using the RWMultitool (3rd-party), you can modify any of the existing templates or build your own. 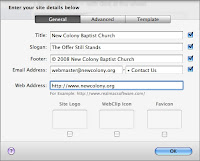 Another constant are the floating Inspectors – the Page Inspector and the Media Inspector. The Site Details, which was an Inspector in version 3.6, is now a Sheet on the main site window. They allow access to the various features available such as Side Bars, Style Sheets, Optional Colors and Fonts, Podcasts, Image formatting, etc. Many of the options are theme-constant but some theme and add-on vendors will expand or offer other options in these Inspectors, so while the extensibility is unarguably superior to iWeb, it can have the tendency to get confusing.

Downside #1: Podcasts. This is not as well-implemented as I would like. The Inspector is confusing and many of the standard iTunes tags seem not to be standard in RW, like duration and Release Date, leaving you uninformed and out of order on iTunes.

Downside #2: Cost. While the initial cost is low and comes with many options, you are going to want to buy at least some of the many addons and themes. RWMultitool and Blocks appear to be almost standard addon purchases. And while we are not looking at huge prices ($9-$30) they are going to increase your investment in the application. It’s major strength in comparison to iWeb is also it’s major weakness.

Upside #1: Publishing. Supports .Mac but more importantly, supports standard web hosting services and will easily publish site updates only to both types of services, no exporting to a folder first (but you can if you want). One of my biggest gripes of iWeb is it’s content size. With RW you can elect to Normalise (UK spelling) the site so all the images are sized down to 100%, decreasing file size, upload time and loading time.

Upside #2: Extensibility. Hundreds of templates, hundreds of addons, you only need to add them when a client or a project calls for it and then at a modest price. If you are working for a client, you can often build that into the cost of the job. Or, write your own.

Because I use a standard web host, I was having to export the entire site to upload each time I made a change using iWeb. With RW, I can just publish the changes, which makes my work easier. I was able to pick a theme similar to iWeb and move the content over in only a couple of hours. And although RW was able to support multiple iPhoto Album, I found it was easier just to collect all the photos I plan to use into a separate Album, placing each set of images for each RW Photo Album into it’s own folder.

It’s own issues aside, RW is the tool I use now to create and maintain this particular site (see it live here, see the iWeb version live here). In the next article, we look at Sandvox 1.2, by Karelia Software