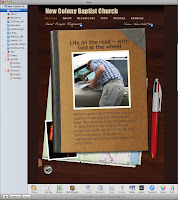 Everyone using a Mac probably has some version of the iLife suite of apps on their system. iLife comes with iTunes, GarageBand, iPhoto, iMovie HD, iDVD and iWeb. For the price (free with new systems, $79 otherwise) it’s a tough act to follow. Even though iLife ’08 has had a hard time convincing people to use the new version of iMovie HD, the remainder of the apps have been improved one way or another. So, my suggestion to you, if you are considering using iWeb, it’s worth the upgrade for it and all the other apps iLife includes.

That being said, iWeb is not without the typical love/hate relationship that many popular apps suffer from. It’s slick, it’s easy to use for most design requirements, has 26 very well-designed templates, plays very well with .Mac, is integrated with the other iLife apps like iTunes and iPhoto as well as Apple technologies like QuickTime, Drag and Drop and CoreServices.

However… (you were waiting for that, weren’t you?) However, not all is roses in Appleville. For instance, iWeb wants you to have only one website. Yes, you can create multiple sub-sites, but they are all contained in a single file. Loss or corruption will either have you running to TimeMachine to recover an earlier version, or screaming to the nearest cliff. Luckily, there is at least one third party solution that allows to create and manage multiple iWeb site files, called iWebSites.

Another issue is the publishing problem. If you have a .Mac account, great! You can publish the entire site or only changes directly to your account – it couldn’t be easier (maybe a little faster, though). But if you want to publish to another server, well, you can’t – directly. You need to publish to a folder on your hard drive, then upload it to your site using an FTP program like Transmit or Fetch. Ugh. And if you make changes, you have to re-publish the entire site and then re-upload the entire site, because you can’t be sure of which were just the changed files. On the church site, I make changes at least once a week. I have been wasting huge amounts of time doing this.

*Update 7/1/2008* I just came across a small app from Plyxim software called Easy iWeb Publisher that allows you to publish changes to your own hosting service, and it’s free (donations accepted)!

Oh, and custom naming or the ability to organize file placement or common images? Forget it. iWeb uses it’s own way of doing things, and you just have to live with it. Every page has its own folder for HTML and images. Yuck. While we’re on the subject, iWeb uses a lot of PNGs to create some of the layered looks in the templates, which dramatically increases the loading times, even on fast connections. Hello? (knock, knock) Anyone home? Looks are important, nay, even critical, but only if you can download it to your system fast enough to see it.

Building the site is very WYSIWYG, but there is no way to edit the code directly. Now many end-users probably don’t care about that. But I certainly do. As a developer, I want to be able to access the code directly and make changes. Yes, you can add an HTML web widget to inject custom code, but still you can’t access the entire page directly. Search and replace? Yeah, but on a single page only, not the entire site. And, of course, no way to search the code.

As I mentioned at the start, iWeb does some things very well. I won’t let all the negative comments stop me from still recommending this app for certain users doing certain kinds of projects. Adding slide shows, movies, blogs, journals, is easy, fun and fast. Almost everything in a template can be modified in some way from location to color to font. Even templates can be switched with a click of the mouse on a page-to-page level, and still maintain your content. The Inspector and Media Browser give you control over the pages and imported files. Apple does pay attention to design details and the control over content as well as the interface, show that. It even allows you to insert Google Maps and Adsense onto your pages.

Another benefit of iWeb is it’s relationship with iPhoto. With the Core Image functionality it shares, iWeb offers some nice tools to adjust your photos without having to go back into your other applications. It also offers the Instant Alpha option, allowing you to intelligently drop backgrounds out of most images.

There are some companies that provide iWeb templates, after the original ones get a little stale. And with as many people probably using iWeb, that could be faster than you think. But you have to go out and search for them, there is no central place to review vendors or designs. Also, other than the basic Web Widgets, there is no way to add custom widgets to your pages. So you’re pretty much stuck waiting on Apple to upgrade the features. I have come across someone who has written an Automator script to add Google Analytics, but it’s a post processing function not integrated into the program. There may be others who have done similar things.

All that being said, I like iWeb. I used it originally when I wanted a new look for the church site, and I was able to move the content over from the existing site pretty easily and took me only a few hours to convert. But I realized that after having it in there for a while, there were a few things that began to irritate me. However, I was stuck for the time being with seemingly no other option than to go back to my original Dreamweaver and Fireworks files. Until… (read exciting continuation next week!)