Yes, muchachos, while my lime slice is slowly sinking towards the bottom of my frosted beer glass, let me speak to you of the desparado of commercial software, Señior Open Source! Bane to bloated, costly commercial software everywhere, cheered by the ranks of the unwashed (phew!) endusers. This type of software is free, available on multiple platforms, and strongly supported by developers and endusers alike. 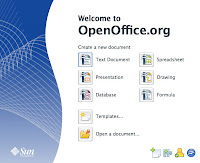 Do you have to work in the Microsoft Office? Not sure if iWork will work for you? Want more features than TextEdit? Try OpenOffice! It’s reads and writes to most popular formats (even some that MS Office won’t read!). It even supports Microsoft’s new .DOCX format. You can’t beat that with a stick. Even comes in two flavors, the original and NeoOffice the first to deliver a Mac version of this productivity suite, which still supports the PowerPC chip. And they both come with equivalents to Word, PowerPoint and Excel.

And what’s even better, OpenOffice is extensible, offering many plugins for additional features, templates, dictionaries, etc. This is the way to go for starving students, or for small offices looking to get multiple copies of software without the licensing hassles.

Recently, OpenOffice released version 3.1, which is a still more polished version of their software. A list of the improved features can be found here. I don’t need to go into the specifics of each application, if you’ve used MS Office, you know how to use these. Have an old version of MS Office? Need a copy for a second machine? Don’t want to pay for the upgrade? Or maybe just looking for a good deal? Check ’em out.