No, I am not talking about the latest Jason Stratham film, neither am I talking about the device aboard the starship Enterprise that whisks your molecules from one place to another. What I mean to say the latest means of file backup/syncing/sharing… I mean Dropbox. Got Mac, PC, Linux? An internet connection? Here is a software solution that allows syncing on all these platforms as well as access via the internet and even sharing via embedded HTML links. Oh, and did I mention it’s free?

Yup. Free. Nice way to begin the new year. In less than a couple of minutes you can setup a Dropbox account, download and install the client for your respective machines and you’re done. The software integrates right into the OS so on the Mac and Linux it displays in the menubar and on the PC it’s a system tray icon. It also appears in the Mac directory under Places and even adds a command in the toolbar of the Finder windows. Unobtrusive but always available. Pop the folder open, move a file into it and voila, it appears shortly thereafter on all your machines.

Ok, a little qualification here. It’s free up to 2GB (a smallish thumb drive), then if you want additional storage it’s $9.99 for 50GB and $19.99 for 100GB of storage. I would like to have the ability to upgrade in increments of 5GB or 10GB since 2GB might be a little small for some people but 50GB may be too much for most and certainly not for $120 a year. Barring that maybe raise the free amount to 10GB which may be more in keeping with the thumb drive concept. 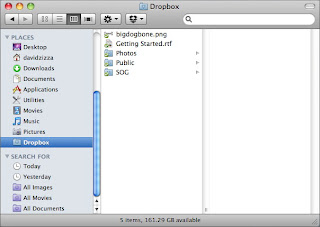 There are a couple of other features that are pretty neat as well. Create a folder and drop a bunch of pictures in there, then add them to the Photos directory… poof! Instant slide show. See a sample on my Dropbox here. You can share files with anyone using the Public folder. Just drop some files in there and right click to copy the link and share it on IM, email, etc. There is even a collaboration feature that allows Dropbox users to share files amongst each other as well, just by inviting them via email. Nice! You can even manage to earn a free additional 1GB in storage by doing just a few easy things like taking the tour, installing the software and adding a few files.

A big surprise here is every time you save a file in Dropbox, Dropbox syncs it to their secure servers. Dropbox keeps a history of every change made so that you can undo any mistakes and even undelete files. By default, they keep the last 30 days of undo history for all your files. They also have an unlimited undo option called “Pack-rat” (available in only the paid versions). Think of iDisk and Time Machine online with multi-platform capability.