This week’s article concerns printer sharing. Those of us that use equipment until it falls into pieces (you know who you are) should be especially pleased to know that you can often share your older printers not only with newer Macs, but also with PCs on the same network. For example, I am currently using an Apple LaserWriter Select 360 that’s as old as the hills on my Mac and PC network. Amazed? Astounded? Then read on to uncover how this amazing feat was accomplished and how you, too, can be a network printer guru. 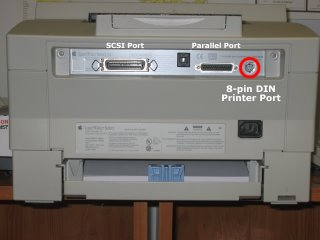 Most of the older Apple-specific printers connected to the Apple Printer Port, a round (DIN8) connector. Many of these also sported a standard Parallel port connection for hooking to a PC. Then printers came out with the AAUI port, which allowed various types of Ethernet connectors to be attached using an adaptor. After that, many network capable printers came with or had options for adding a standard RJ45 connector for use with 10-base T or 100-base T connections. Current printers come with USB ports and may even have WiFi connections, requiring no cables at all! 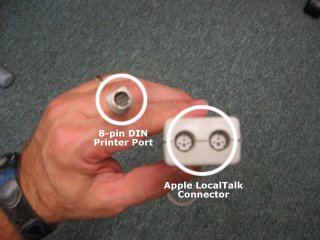 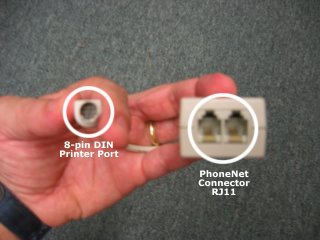 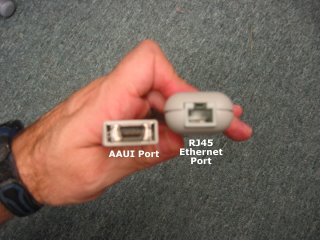 Older printers communicated with the Macintosh using a LocalTalk cable. It’s not typically a cross-platform type of conenction, but we’ll address how to overcome that later in the article. EtherTalk is the more common of the network communication languages and is used by pretty much all computer platforms.

So the printer and computer can “see” each other on the network. Now what? Well, now they need to talk the same graphic language in order to properly process print requests. Like LocalTalk, QuickDraw was the original language spoken by Mac printers. Then Adobe Postscript arrived to smooth things out and give much better results. Of course, there then came a few reversed-engineered Postscript clones. And not to be outdone, the PC world came out with their own printer language called PCL. 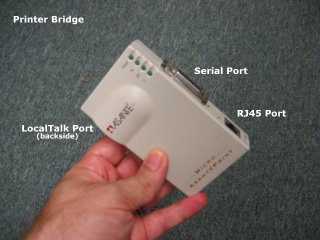 Sure, ok, but what does all this gobbledegook mean? Well the general trend indicates that most newer printers are more easily connected to a network and shared among platforms. The older printers may have a harder time, but it can be accomplished. Here’s how. If you have a printer with a Apple printer port, you will need to do one of two things. First, you can connect it to your networked computer and share it via software. The two main drawbacks is that it requires an older computer (but you can pick one up cheap and just use it for that purpose) or a PCI card that sports Apple printer ports, and that the computer needs to remain on in order to share the printer. The more elegant solution would be to acquire what is known as a printer bridge. As the name implies, it is a means of bridging the LocalTalk connection with the Ethernet connection. You plug the LocalTalk cable into one port on the box and an Ethernet cable into another and voila! the printer is now available on the network. I found one on Amazon or you could try your luck on eBay, but they are out there. I have one from Asante called Micro AsantePrint.

Great, my printer is now on the network but my PC can’t see it. That’s easy to explain. The PC does not natively support AppleTalk. The solution is Computer Associates’ PC MacLan. It allows bidirectional printer and file sharing. Problem solved.

Whoops, the article was just going to press, when I forgot to mention something pretty important. Drivers. They are the softare your apps need to talk to the printers that we spent sooo much time hooking up to the network. The original disks or CDs (if you can find them) are probably hopelessly out-of-date. If it’s an Apple Printer, no-prob. The drivers are built into OS X and OS 9. Even a few in Windows. But other than that, the best thing to do is to check with the Support, Software or Drivers section of the manufacturer’s website. Other than that, try your luck at DriverGuide.

Beware the Pricking of my Thumbs…

There’s always things to be aware of when dealing with legacy equipment as well as legacy protocols. If your network is all wired, that is, no wireless connections, then this should work great for you. However, depending on your router, you may experience problems going from wired to wireless. Your wireless computers may not see your now networked printer because it may not support AppleTalk over wireless. Sad to say, Linksys is one of those brands. Check with the manufacturer before diving in.