Now please, have a seat on the couch and I’ll tell you all about it. In my role as web developer and consultant, I have often had to look to the ugly step-sister of the computing world (Windows) in order to accomplish some of my tasks, whether it is integration of multiple platforms on the same network or seeing how a web page renders in Internet Explorer. I have experimented with applications as far back as Soft PC and Virtual PC, even with the Macintosh Performa with the PC add-in card (that was weird). But the best way to do Windows has been on a real Windows-based PC. So I have had to own and maintain a PC in my office for a number of years. Until now.

With the advent of the new Intel-based Macs, it has never been easier to have a true multi-platform environment on the same machine. There are several ways this is happening and all of them have an impact on how we do our business. The first is Apple’s own Boot Camp 1.4. This beta software (which will become non-beta with Leopard), allows you to partition part of your drive into an FAT32 or NTFS format and then allows you to install Windows XP or Vista. You create a drivers CD you use at the end of the process to install all the drivers that allow you to interact with your Apple components as well as a Startup Disk icon representing your new Windows drive. Select it, restart and wham! Welcome to Windows. This is your best option for the PC gamer who wants full access to their video card’s performance and 100% Windows compatibility.

Enter the realm of Virtual Machines (VM). This type of software allows you to create a container file that holds the virtual disk, operating system, applications and all created files. It doesn’t require a hard drive partition and runs almost as well as Boot Camp. The advantage is that it runs within OS X. You can launch Windows in a window whenever you need it. The two major choices here are the $79.99 Parallels Desktop 3.0 (15-day trial), and the $59.99 ($39.99 with a $20 mail-in rebate) VMWare Fusion 1.0 (30-day trial). In this article, I will be discussing Windows since that would be the most often selected operating system, but be aware that you can run other operating systems as well, such as Linux, Unix and OS2.

Installation
To install Windows XP or Vista using either product, you must own a full copy of Windows XP SP2 or any flavor of Vista. Pop in the CD, then enter your name and Product Key and away you go. I laughed, because it’s actually easier than running the install on an actual PC. It seemed to happen faster, too. Both applications also have the ability to use the Boot Camp partition as the source drive, making a reinstallation of Windows unnecessary. I had already done this with Desktop, but was unable to use Fusion with the same partition. My guess is that it didn’t like having Parallels Tools on there, since it wants to place its own version called VMWare Tools on the partition as well, so I was unable to test that function for Fusion.

Using the VM
Fusion does nothing for many seconds, so I almost thought I hadn’t double-clicked, but then it boots and all is well. It requires the typical Windows login. For some reason, Desktop doesn’t and just boots right to the Windows desktop, much quicker than Fusion. However, Fusion has a Suspend feature which allows you to boot directly to the last saved state of your computer, as if you put it to sleep. Then it becomes as quick to boot as Desktop.

Compatibility
Ok, now to the nitty-gritty. We want to use these applications to either save time from booting into Windows, and/or save money by not having to buy all the same applications over again. So what kind of applications can they run? In a nutshell, every standard productivity app runs. All of Microsoft Office, Creative, Web, and Adobe’s Production Suites, even programs like AutoCAD. Microsoft Update, AVG Anti-virus, Spybot Search & Destroy, Ad-Aware and Spywareblaster all installed and worked fine on both (good thing, because you’ll need them in Windows…).

So, fine. What doesn’t work? In another nutshell, games. Support for 3D acceleration, Direct X and OpenGL is iffy at best. Want to run games? Use Boot Camp. I tried a smattering of games from old to new (Ghost Recon w/Desert Siege and Island Thunder, Syberia I, Call of Duty I, GameTap) and only got partial success. The lower end stuff works pretty well. The new games need to access your video card directly. Until that happens, Boot Camp is your best bet.

One big item to note is that when installing multiple CD games, I had to manually disconnect the CD drive from Fusion, eject the CD under OS X, put in the new disk, switch back to Fusion, and re-enable the CD drive. Blech… The installs under Desktop were flawless. Odd, but during that time, I couldn’t eject the CD using the keyboard eject either, which also worked fine under Desktop. The other strange thing using both apps was that the virtual system window resized when launching a game to the game default and didn’t always resize normally upon return. At least Desktop managed to return to the right size most of the time. 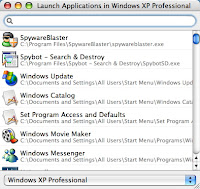 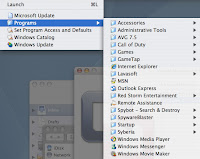 Integration
Both apps have the ability to “blend into” OS X. Desktop calls it Coherence mode and Fusion calls it Unity mode. They both allow the user to use the entire screen for applications, rather than for interfaces, so you see only the program windows from either platform when called for. Coherence allows you to see the Start menu and Taskbar along the bottom and functions as it does in Windows, Fusion has a Launch bar for you to access your Windows apps. In Desktop, your Mac Desktop and files are as readily available and usable in Windows as if they were right in the drive container, whether in Coherence mode or not. And conversely, your PC drive icon and shortcuts can appear right on your Mac Desktop as well. At first I wasn’t thrilled with the way Fusion handled this feature, but after getting annoyed with the Start menu bar Parallels places at the bottom of my screen and interfering with DragThing, I think I would prefer using Fusion’s way.

One Trick Pony
One trick up Fusion’s sleeve is the ability to convert a Parallels VM to a Fusion VM. Just download a converted on the Parallels VM and run it, then quit and boot Fusion and tell it to open the Parallels VM file. Poof, done. Nice little trick, that. Combine that with the cheaper price along with the discount, and… it’s still not quite enough to make me want to switch. Desktop is a much more refined and functional version of a VM. So, go ahead and try it out and you’ll see what I mean.

And now for something completely different.
I have been discussing these three methods – Boot Camp, Fusion and Desktop – but there is one more method I will mention. It’s not something you buy to run Windows apps, but rather what developers can use to bring Windows apps to the Mac. It’s called Cider. Basically it allows Mac Intel machines to run Windows apps without the need of Boot Camp or any VM software. A great example of this is GameTap’s Myst Online: URU Live game. You can download and use it for free and it’s the exact same application as on the PC only running through Cider on the Mac. This might be able to more affordably bring some Windows apps to the Mac that we would otherwise not see.