Here’s to you, Mr. CD/DVD Disk Art Designer Guy. After all the time, effort and money is spent developing those slick multimedia and music titles, the producers give you one hour to design the disk art. You suck down a frozen grandé mocha latté (decaf, with soy milk), put in a quick call to your psychiatrist and get started. But where to begin?

Luckily, life is not a Bud Light commercial. There are three apps I want to review here that help you design professional-looking disc art, be it for a label or, for those who have the proper equipment, for printing directly onto the media.

The first product I ran into was Print CD which came with my Epson Stylus Photo R200. It has a media tray that you slip into the manual feed slot which can print directly to ink-jet printable CD and DVD media. Very cool. The software interface is not strictly up to Mac standards, but it is pretty easy to figure out. It is comprised of a series of palettes which allow to manipulate the various graphic elements – the images, the text, and objects. It only has 3 Zoom settings, 50%, 100%, and 200%. It should have a Fit to Window and the palettes should snap to the main window but doesn’t, so you have to futz with the palettes when you resize the main window.
You can insert pictures of any type into the Background and resize them, rotate them and apply these basic effects to them – Contrast, Blur, Brightness, Spot Color, Blur and Mosaic. Text can be added with the usual style options (including shadow and character spacing) and then you can Distort the text á la Microsoft Word (although not as many options). You can also add lines, circles and rectangles (constrained or not, with outline or not) but I find that I rarely use these.
While there is no layering per se, there is a separate Background image and you can Bring Forward, Bring to Front, Send Behind and Send to Back items in the foreground. It’s not true WYSIWYG, since you have to select an item and enter the changes in the appropriate palette, but as I said, it gets the job done. And it’s free with the printer. You can change the inner print diameter for various media types as well as Fine Tune the Print Position, in case it doesn’t align properly. That setting is remembered, so you need only set it once.
I printed a lot of media with this app and found it reliable and consistent. The other great thing about it is there seems to be no ink wasted. That is, ink is not smeared onto the outer edge or the inner circle that you have to wipe off. It’s also Twain compatible so you could scan right into the application. Unfortunately, the version I have is not Universal Binary and not quite up to date for OS X, which is why I moved on, and works only with Epson printers. 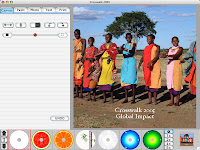 Discus 3.16/4.1 by Magic Mouse Productions
It’s always good to explore what comes bundled with your applications. Toast 7 for example, came with several nice utilities to do such things as digitizing LPs, cataloging disks and for this review, designing cover art. Specifically, it came with a lite version of Discus 3. Again, a non-standard interface, but with some nice features, one of which is the New/Old Projects dialog which comes up immediately upon booting. I would love an option to pick the Old Projects tab by default, since after designing a few files, I like to edit existing ones to create new ones. Plus it shows thumbnails of the designs, which is also cool.
Discus combines everything into a single window, which is nice so that resizing doesn’t effect the placement of palettes. It also sports 4 levels of zoom as well as a Fit to Window option. It has silly sound effects for commands which reminds me of Fontographer and Kid Pix, but luckily, you can turn that off before you are driven insane. Discus relies heavily on a tabbed, progressive interface that guides you through the design process, but doesn’t force you to do each step in the same order every time. And you can go back to any step when you want.
As with Print CD, you have a Background, here called Canvas, then separate layers for Paint, Photos and Text. Where this breaks down is not being able to click on a particular item and being able to edit it immediately (in Fireworks CS3 it’s called Single Layer Editing). It’s kind of annoying to have to go one more step and pick which layer, then pick what you want to edit.
In Canvas mode, you can select from one of the many images included with the software from the scrolling preview at the bottom or pop up a separate preview window. The lite or RE version comes with about 230 but the full version unlocks about 850 more. You can preview those locked images but can’t use them unless you upgrade. My personal philosophy on clip art is that you use it much less than you hope to. However, that being said, I made pretty good use of the restricted set of images for the disc art files I have created. Luckily, you can also use the Photo mode to add photos to be used as a substitute for Canvas mode. You can flip, invert and rotate these Canvas images as well.
Paint mode has a whole MacPaint-like tool set including brushes, objects and clone tools. Again, for me, these features have been largely unused, but it’s nice to have the option.
Photo mode has a more comprehensive set of tools than Canvas mode, including duplicating , cropping, scaling, stretching, corner radius, edge softness, lightness/darkness and opacity. Again, having numbers for precise measurements would be nice but the sliders work ok.
For text editing, there are many similar options to Print CD and also includes line spacing, angle and opacity. I would’ve liked the standard text window here to pick specific sizes, but a tool tip shows you the actual number and a sample of the choice you are making, which is a nice touch. The fonts are displayed WYSIWYG in a 4×4 grid at the bottom and you can pop up another window that shows them in a 6×42 grid on several pages. I think it would’ve been easier with just a font menu, since this doesn’t support family groups and makes the list very long.
The last tab is Print. This is where you can select the proper template for your printer, make a test print, adjust the inner and outer diameter and fine tune the print area, with some nice visual feedback on the right side. Two last features I would mention is the ability of the program to import track names from Toast, JAM, Dragon Burn and iTunes and to export the disc art to BMP, JPG, PICT, TIF and Photoshop formats. It would be nice to have the option to export with or without bleed and with or without the center whole. It also is not Universal Binary, though the new 4.1 version is.

Disc Cover 1.5 from BeLight Software
Moving to our final contestant, we have another bundled application, this time with Toast 8, called Disc Cover. Here we may have reached the pinnacle of disc art applications. This app is Universal Binary and iLife integrated as well as being much more Mac like than the previous two reviewed.
The interface is similar to Apple’s suite of iLife and iWork apps, using a combination of main window and more detailed palettes of information and control. It sports a foreground and background mode like the others and gives you an iLife media browser on the left side. There are commands to open the standard Color and Text palettes as well as context-sensitive Inspector palette. The program appears to have almost infinite Zoom in and out settings along with Fit Page, Fit Width and Fit Height. There is a Recent documents menu, sadly without thumbnails.
You can access iTunes (an audio CD or even Toast) for playlists, iPhoto to import photos and iDVD to import DVD chapters and backgrounds. You can access any file through the Open File command and navigate the huge quantity of backgrounds, objects, default Picture folder, create a collage of images or even generate a geometric image to create your artwork. It also ghosts the image on the bleed and non-printable areas, so you can position your artwork more accurately. Lastly it gives you the option to build an entire project of documents from disk to cover to folding booklet to insert to keep the design consistent as well as all in one place.
Ok, downsides… No Revert command (Discus does), no image preview of recent documents (I really like that feature), palettes don’t snap to main window, no export as image option, Single-Layer (Background or Foreground) editing only, and maybe the most annoying is that upon printing, it does produce some excess ink on the non-printable areas of the disk.
So while Print CD does a good job, I am tossing it because it’s not UB. Then I am left to choose between Discus and Disc Cover. The version of Discus I own would need to be upgraded for UB support, which I guess is ok, but it’s support for Apple technologies is lacking. However, Disc Cover has that annoying issue with the excess ink that makes me hesitate to fully endorse it. Yet Disc Cover is the one I am going with since it supports many current OS technologies, timesaving features and can do whole projects. But guys, clean up your act, huh?