While keeping track of your software may not be as exciting as watching a James Bond flick, it could be as challenging as watching Mr. Bond fight the forces of evil in defense of England and the world. Maybe you have dozens of little post-it notes or the original software boxes on shelves or you find you have made more shareware purchases over the years and no hard filing system for all those downloads and online purchases. I have a client who is looking for a way to track the software assets on individual systems for the purpose of determining how many licenses they own of each product. This led me to my latest tale of intrigue in tracking down chief software suspects.

For those on a budget, there are simple ways to do this. In any word processor, simply make a list or, even better, a table and add columns for software title, version number, serial number, maybe date purchased/upgraded, and the companies website and technical support number. If you own a spreadsheet program like Excel or even a database program like FileMaker, you can easily customize the layout, print reports and more. 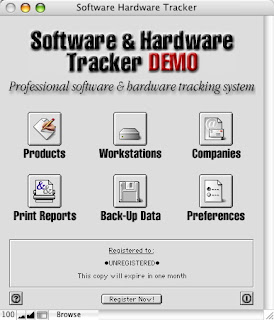 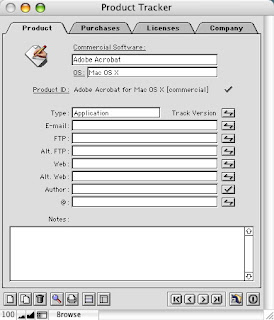 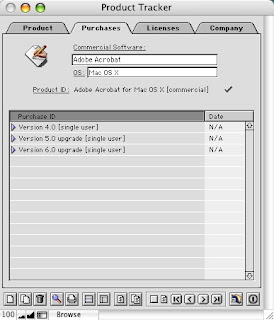 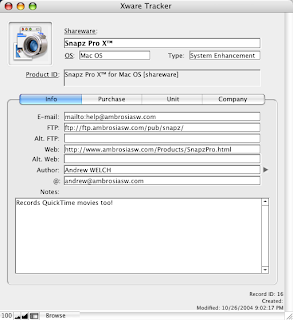 There’s a shareware application called Software & Hardware Tracker 4.2 that is based on FileMaker which I had purchased some years ago. I was actually able to find the website and download the most current copy. It now works using a run-time version of FileMaker, which is a good thing because it’s the 5.x version and not the 7.x or 8.x that is available now. Probably the most comprehensive version of all the software I reviewed but suffers from an antiquated user interface and overly complex means of accessing and entering data. The cool thing about is that it allows companies to create users (called workstations) and then assign versions of applications to each. It also allows for historical recording, versions purchased, costs, etc. allowing you to track every upgrade. You also can build a product list by software company too, eventually easing data input since all the individual database files can be cross referenced. This is the only app in the review that has complete reporting capability as well. There are a lot of good things to say about this program, it’s too bad that user experience (especially entering data) is so complicated. It would do well with tool tips and more meaningful icons. But if you want all the details, this one’s for you. Cost is $15 for single workstation, $25 for unlimited workstations (for a company) and $50 for full layout and script access. Their website mentions a complete re-write of the application for FileMaker 7.x called Xware Tracker. They have an enticing screen shot (see final screen shot, left) of the proposed new interface and it looks promising, but it’s still vaporware. 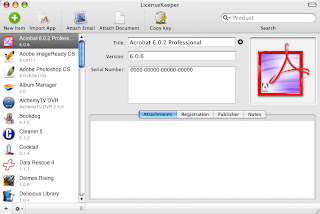 LicenseKeeper 1.0.1
Remember my mantra. If it looks cool and works cool, buy it. This is another one of those programs, this time by a local yokel. It truly evokes the Mac-ness of software interfaces – Drag and Drop, Spot Light, Toolbar, great use of icons, easy-to-use, etc. An awesome feature is the Attachments, which allows to add highlighted email (such as registrations and receipts) from Apple’s Mail program and copies the email to the application, even parsing the serial number and automatically adding it to the field. How cool is that? I can’t wait for future versions, which after having communicated with the author, will include categorizing of the list, and I sincerely hope, printing. I would suggest making tweaks using iTunes and iPhoto as guides, for creating software albums or playlists – essentially folders for organizing software under user or application type. Maybe a way of adding duplicates for multiple copies of software, too. But for the printing, a must-have. $19.95. 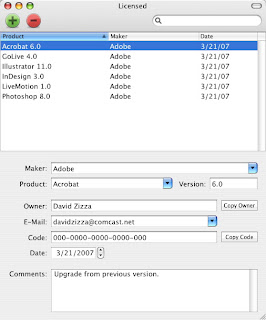 Licensed 1.0b1
Here’s a freebie that is a great alternative to LicenseKeeper. Not as slick or as tricked-out, but it does the job. Nice that it automatically adds the version number to the listing (but I wish it did that with the company, too). Also uses Spotlight. Doesn’t allow for attachments, nor does it use links to websites or emails, which the others feature. And there’s no printing, which to me is a deal-killer. But hey, it works and it’s free. 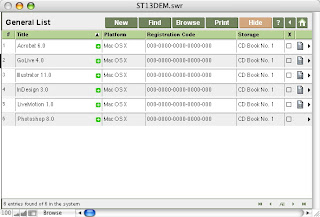 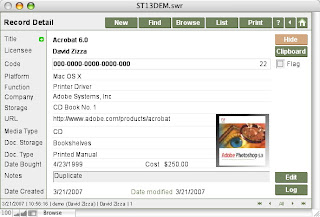 Software Tracker 1.3
YAFA (Yet Another FileMaker App). But all things considered, not a bad one. Works similarly to the Personal Serial Database mentioned below, lists important info first and can enter into a detail screen. The problem I have with this is similar to SHT 4.2, in that it seems very complicated to do a simple delete record. You have to find the record, edit the record and then delete. Three steps is too many for me. Allows you to add an image of the software, though it would be nice to do something automatic like LicenseKeeper (I mean, it’s painful enough to do the input without having to worry about finding or scanning graphics). And the cost at $40 is simply outrageous, considering the less expensive and even free alternatives that do a better job. Wouldn’t let me print from the demo, but since it’s a database app, I’m willing to conjecture that it does a decent job of listing the information in a concise manner. 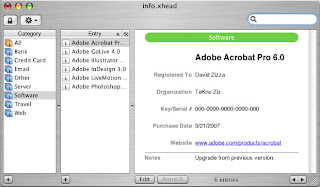 info.xhead 1.3
A nicely designed little app that uses Apple’s Address Book as the basis for its design. At $15 it’s a good deal, but you get what you pay for, which is not a lot of customization. No separate company and version fields, printing doesn’t allow for line listings only, so reports would eat up too much paper.

Personal Serial Database 1.6
A FileMaker Pro 5.5 run-time database application that doesn’t suffer as much from the interface issues of the Software & Hardware Tracker mentioned earlier. Has a nice, compact layout, and shows the important stuff in a list, while giving you the option to see the full detail. I couldn’t find a link to the software on the developer’s website, which makes me wonder if he has abandoned it, but you can get it from VersionTracker. And it blows the socks off of the other FileMaker contender Software Tracker, since it’s free. Unfortunately, it seems to only print the layout screen. Weird. It’s capable of so much more since it’s built on FileMaker.

Well, yes, we want to maintain as much data electronically as possible, but it’s still a necessity to be able to print reports for personal backup, security, insurance, etc. So while I’m crazy about LicenseKeeper, even a bad job at printing is better than none. So if reporting is a must, Software & Hardware Tracker, followed by info.xhead. Otherwise, it’s LicenseKeeper all the way.