It was a dark and stormy night… wait, wrong story. I thought this was going to be a program draw down, a fight to the finish. Little did I know that the two image enhancing apps were going to shake and be friends.

I was looking to make some party favors for our upcoming SDF X (Screecher Double Feature X, for the rest of you – Halloween party). I had these great JPGs of 50s SciFi B movie posters. I wanted to throw some kind of border or frame on them, print them and then place them on popcorn bags for our event. So I went to the ever-useful Versiontracker.com and did a search. I came up with several options and as I looked them over, came up with a couple of guidelines: 1.) it must be a separate app and 2.) it must not be very expensive. There were a couple of Photoshop plugins that looked good but they were very expensive and I was just doing this for fun. I will list them for you at the end of the article.

But when I got down to looking at what I thought were competing programs, I was surprised to discover that they approached the issue of framing from two very different perspectives. The first product is ImageFramer by apparent software. They treat the image like a real photo or painting that you want to enclose with a realistic 3D frame with shadows, mats, directional lighting, the works. 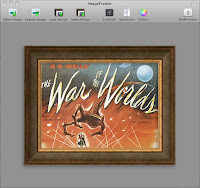 First off, I want to say that the built-in frames are beautiful. It looks like you could reach out and touch them. If you’re an artist and want to show off your work, look no farther. Or a photographer putting together a portfolio. They offer mostly traditional, ornate, carved, wood-based borders, but there are a smattering of alternatives and more from others online. Horizontal or vertical, the border resizes automatically to fit.

High marks for the GUI. The interface is simple, well-designed and easy-to-use. I was able to pretty much figure out the whole program without the aid of a manual. The toolbar has all the most used items, a sliding drawer provides the Variations pane and a Controls window which provides the frame browser where you can look at frames (organized into Sets and Collections) and tweak the image, frame and mat settings. I would split the frame browser into a separate window or a tab since it’s a little tight for space. Which begs the question, why can’t you drag out the corner? 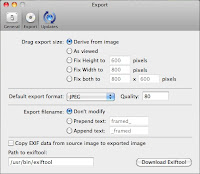 An additional feature to consider would be an iPhoto browser or a general media browser to be able to see folders of images. A great option would be to use Karelia’s free iMedia Browser, or have the app link to it. Gak! I can’t drag from the iMedia Browser to the open ImageFramer window. Not sure if that’s an apparent or a Karelia issue (after some research, it may be a Karelia problem. They are releasing an update next month, will let you know). 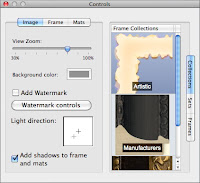 Come up with a great frame? Save it for use with other images or send to a friend to try out. Use yours or someone else’s framing file by simply dropping it on the image in the open window. Or use the boring button in the toolbar (lol). Slick.

Another feature that’s very nice is the ability to drag the image right off the window into another app or to the Desktop, saving it with the export settings and name of the image, although I had to play around with the keyboard to determine it was the CMD key. Of course, the manual explains this.
Batch processing? Yep. Select a bunch of images and drop into the open window. Watch out though, it changes the originals, so make sure to save a copy of them before proceeding, or change the saved file name in Preferences. Would be nice to be able to drop a folder of images on the window as well. The app takes a little while to process them but keeps you informed of the progress by a nice little window with a list of the images. 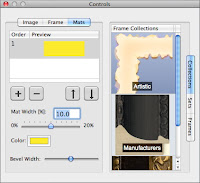 To give the programmers credit, they have a PDF that explains step-by-step how to import your custom frames or those of other designers. And there are many to be had online. But to be honest, I spent wayyy too much time mucking around with that and almost gave up, until I saw a screen shot of the folder structure. But it would be nice to have an import feature where you can give the app a zip file and let it parse out the files, or some other container-type import.

Build a style and them add it to the Variations pop out panel. Build more styles and then click between them to compare. If only it didn’t crash every time I tried to modify the name of the variation or clicked back & forth, it would be cool (it seems that using the cursor to move between them is ok, though). What would be even cooler is a multiple up feature, where the image is divided into quadrants and you can pick up to four variations to compare simultaneously!

You can drop a framing file into the Variations window as well. Sweet! However, adding a file to the Variations window should use the name of the file. It currently uses the default name. Maybe the default name could somehow show some of the settings so the user can easily switch between them without renaming. Oops, just caught a problem. Adding a frame with a mat to Variations causes the mat to expand and it stays that way, losing the original setting.

And then of course, there is the price. For $39.95 we’re talking more than a one-trick pony. GraphicConverter is only $45.00 after all (but it doesn’t do borders). $49 for a family license and $69 for a commercial license seem more reasonable, considering the potential number of users. I would suggest a price of $20-25 for this.

There are a lot of nice things about this program. You can try a free version that just places a watermark on your image, but otherwise gives you the whole enchilada. However, I would wait for a couple of bug fixes and maybe a price reduction before buying. Remember, this was for a party and I didn’t want to spend a lot.

This is getting a bit long for my typical post, so I will pick up with EasyFramer in the next one. Go ahead and try the free download of ImageFramer and let me know what you think.

Here are the links for the Photoshop plugins that do similar things: