While many people’s thoughts turn to love on this Valentine’s Day, mine turn to FTP clients. Ok, so I have a problem. But my problem is your gain, since you will learn the dish on the latest and greatest FTP clients for Mac OS X.

So what is FTP? FTP stands for File Transfer Protocol. It’s a means of transferring files too large to send via email. Most email servers have a limit on the size of attachments that can be sent through them, typically in the 5MB-10MB range. FTP has no size limit other than the capacity of the server you are transferring the file to.

FTP is one of the original internet protocols, but has only really come into vogue the last few years because of the massive amounts of data being transferred hither and yon across the width and breadth of the internet.

OS X even has FTP built into it, accessible through the Connect menu in the Finder. But it’s really a very basic version, and misses many of the niceties found in dedicated clients. Though there are many clients out there, I am going to focus on the ones I have either used or found on VersionTracker.

Understanding the Lingo
Most of the things I mention should be self-evident, but here are a few that might not be.

Type-Ahead means the ability for the application to fill the rest of your request with matching items you have typed before, much like Safari and other apps can do. It seems a trivial thing, but when you build your bookmark or favorites list, it sure saves time.

Local View shows a local directory window in addition to the remote window and lets you drag and drop between them. All the apps support drag and drop from the Desktop. It’s just nice not to always bother with the Finder, especially if you have a lot of other programs and files open.

Sidebar is the same as in any Finder window, which shows you commonly accessed items like the hard drive and your home folder and other items you can drag there.

Support All of these programs support drag and drop from the Finder, FTP and SFTP protocols, bookmarks or favorites, and synchronization (except NetFinder). 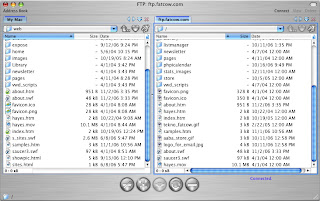 Shiver me timbers, Matey! We have fully-functional FTP client here. Supports all the typical transfer protocols, including iDisk. There is a Dashboard-compatible widget, type ahead, customizable toolbar, and the cost is an acceptable $25. Special killer feature: it supports peer-to-peer file sharing. The only down side is no preview pane, and the interface, while good, is un-Mac-like just enough to be disconcerting. 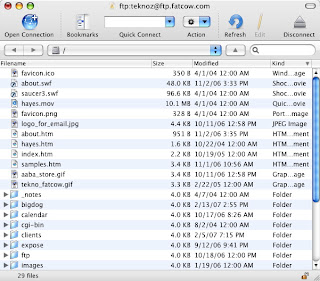 Cyberducky, you’re the one, to make my FTPing so much fun… No preview, no local view, no notification, but a nice interface, type ahead, folder sizes, customizable toolbar, sync, iDisk, Spotlight and Dashboard support. Nice auto-updating feature. And with donation-ware, you pay what you want – or not at all. This program is improving all the time. 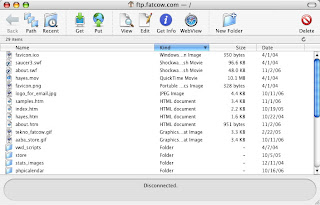 Ok, boy… go get it! One of the more venerable FTP applications out there and once free, Fetch is one of the major FTP contenders if for nothing else its recognizability. It’s had enough time to polish it’s features and interface and has done a pretty good job of it. Like Cyberduck, it doesn’t support preview, local view, notification or type-ahead. And you can only calculate folder sizes on a single item or a groups of items, you’re not able to calculate a bunch of items individually. It does support Dashboard and has a customizable toolbar. Cost is also $25. 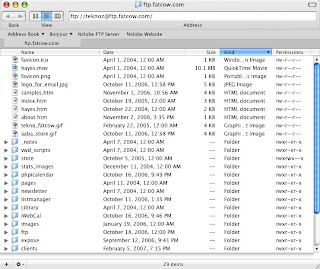 Interarchy has everything to do with integration. Just look at its interface and advanced, OS X-compatible feature list and you’ll know they are not messing around. Though it’s lacking local view, preview, and notify features, it supports virtually everything OS X and FTP from icon view to webDAV and iDisk to Dashboard. Odd that it doesn’t have the sidebar, which would really make it OS X compliant. The only thing negative I can say about it is the price, which at $60 is more than double most of the other offerings. Most people, I think, would not find the extra cost worth it. But it’s a darn good program. 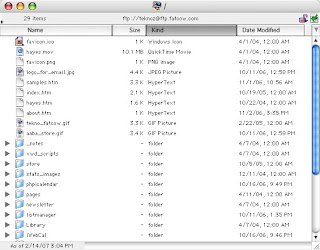 Another veteran like Fetch from way back in OS 9, NetFinder was the definitive Mac FTP application in its day due to its similarity to OS 9. But even with its OS X makeover, it really hasn’t made the jump to full OS X functionality. In addition, it’s the only app reviewed here with no synchronization support. Fun but potentially annoying feature: voice alerts. And on top of it all, lack of current technology features and aging interface, it’s $35. Unfortunately, I think NetFinder has lost its own way. 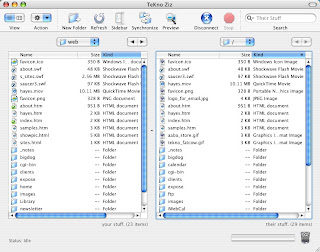 Toot, toot… Hey… beep, beep. Ok, I love Panic software. They have all things cool from their website to their products to their logos and widgets, they do stuff right and they do it Mac. They support all the features I compared for each app with the exception of type-ahead. The only implementation that needs improvement is their folder calculation which doesn’t calculate a group of folders separately. Slightly more expensive at $30, it’s the best extra $5 you’ll spend on software. 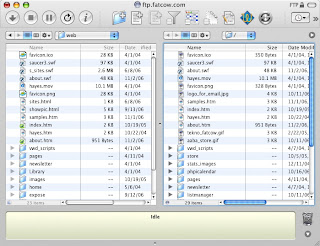 Less filling, tastes great! These guys have piqued my curiosity. They seem very much in the mold of Panic, great website, seemingly good product, Mac integration, etc. I dock them a few points on the interface, since though it mimics Transmit somewhat, it’s just missing a little of the spit and polish on the icons and the notification space seems a little over large. It claims vast speed improvements over the others, but I’m not sure that’s an advantage for most users who have locally-capped upload speeds. It imports bookmarks from all the other apps other than NetFinder. Keep an eye on these guys. Cost is also $25.

Conclusion
With the sad exception of NetFinder, you can’t go wrong with any of these applications. The only features to sway you are the interface style and the cost. I didn’t review every single feature in each program, but as a fairly typical user of these apps, I looked at the features that are most important to me – the interface, bookmarking, uploading and OS X integration. Your requirements may be different. I own NetFinder and Transmit, have used older versions of Fetch, and have played with the other apps to get a pretty good feel for how they work. They all have trial versions, so take a test drive for yourself.