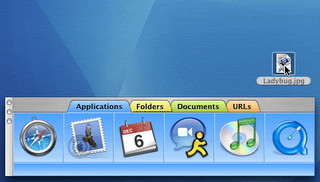 Apple’s Dock was made to be simple and useful. Drag mostly anything into it and you can launch it from there. But the Dock has some built-in limitations to keep it simple and therefore not useful in all occasions. Launcher applications are a personal thing. They need to behave the way you want them to behave (Oh, behave!) or you won’t use it. You want to customize where they appear, how they look and how they function. Like an earlier application in OS 9 called DragStrip, the application I use in OS X is called DragThing from TLA Systems. It makes my heart sing. It makes launching… groovy.

Ok, so it really doesn’t make my heart sing, but it does everything I need it to. For example, it lets me organize my apps in categorized layers for easy access. It has a Process dock and Volume dock that shows my currently launched apps and mounted volumes. I can customize each docks to show icons, backgrounds, colors, titles, 3D effects and shadowing — separately! It can be launched at boot time, and will re-open previously open docks. It even saves backups of your dock settings. Files, folders, volumes — plus — windows, URLs and Clip Board items (cool!) can all be added to DragThing. You can modify Item, Layer and Dock Preferences as well, again, individually. What other utility do you know of that comes with its own paint tools?

And again, it’s an elegantly designed Mac application, right down to the animated splash graphic (my personal favorite) and psychedelic About screen (wait for it). When you have an application that you use so much that you can’t work normally without, you know you have a winner. DragThing should be the new Apple Dock. Only $29.