Yup. I finally did it. After years and years of having a laser printer, ink-jet, fax machine and scanner, I decided to dump them all for a single multifunction printer. “Why now?” you ask. Well for several reasons. The quality and performance of these devices have really come along. You’re not sacrificing the abilities of any individual device just to reduce the clutter in your office. Often, they will surpass the specs of your older devices and even offer some features that you didn’t have before or weren’t so convenient. 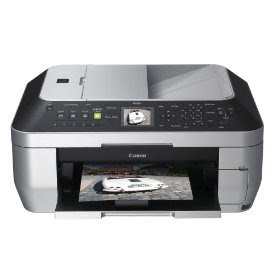 So after consulting Consumer Reports online, CNET reviews and MacWorld, I had it down to the Canon Pixma MX860. Let me tell you why:

I even placed the order for $169.99 through Amazon. But as luck (and Fedex) would have it, the device never graced the entryway of my home. Lost in translation, I guess. Amazon (bless them) promptly refunded my money and I was back at square one. Do I just reorder, or do I look for something else? Well, what was interesting was that I forgot one critical feature that I use quite often that I would like in my printer that the MX860 did not address – CD/DVD printing. I make DVDs for both personal use and for my church and I like to print the info right onto the disk. So since I was using a Epson R200 to previously perform that task, I took another look at the Epson offerings and found the Artisan 800. 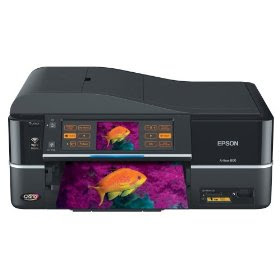 The Artisan 800 was a little pricier ($253.00), and had no auto-duplexer (which I would rarely use anyway), but it did have the print to media feature I was looking for, among these other features:

And best of all, this one showed up! So here is the rundown of what I’ve used so far. The setup was pretty easy, if long. In order to use the wireless networking feature, you have to connect it first via USB (cable not included, and if you ask me is pretty dumb, since you can get cables for a song; even the MX860 even comes with one). I am told though it says the ink cartridges are partials, they are indeed standard ones, plus this package came with one additional black and a 4GB SD card.

The copy function is quite handy, since before I had to use my flatbed scanner to first scan and then print using my computer. Now I don’t even have to have the computer on. Copies are remarkably crisp and print quite fast. The document feeder is nice to have as well.

Printing works fine, though I haven’t tried printing a photo yet. Speaking of photos, I was able to poke my compact flash card from my Canon camera into the slot and pull up thumbnails on all the stored images. I could also print them all out or selected ones or even use the built in Photo Greeting Card Maker, pretty fun! I did try the thumbnails, which were fine, but haven’t tried the other features yet.

Scanner was a little trickier to use, since the software defaults to a local connection and the actual method of setting the location is through a separate program installed in the Utilities folder called Epson Scan Settings. That’s pretty weird. But once that was set properly, the scanning software worked fine. And now that it’s native, my other apps can use it, too, via the Twain driver.

Another bump came with the media printing. For the life of me, I couldn’t get the Epson CD or Disc Cover to recognize the CD tray, they would just print to paper. Annoying as all get-out. So I tried attaching the printer to the computer via USB. Whaddya know, it works! The media is inserted into a special tray that is between the paper tray the LCD control panel. You need to tilt up the control panel to get adequate access to the tray. At first I thought that I broke the tray, since I hit the tray button without first raising the LCD. But no, the tray was jammed somehow. But through the grace of God and some pushing and prodding, I got the tray seated properly and now it opens and closes fine. I hope that this was not a “feature” of the printer, because I hate the feeling that something you just bought is broken.

I then went back and re-installed the software for a local printer to see if that would install what I need for network media printing. And now that appears to work as well. It also seems to print faster on media than the R200 did.

I did get in touch with Epson tech support for both the media tray problem and the CD printing problem over the network. They were less than helpful on the first occasion and only slightly more helpful on the second (they also recommended the software reinstall).

So, all-in-all, the printer is now fully functional and I am fairly pleased. As usual, there are some downsides with using a Mac like no access to the memory card as a volume (there is in Windows), and no access to the Scan To (MC, OC, PDF, Email) functions unless you are connected directly to the computer via USB. I think that’s a universal problem. If I find otherwise, I will edit this post. Otherwise, consider a multifunction with the features you need a definite option to reduce the clutter and make wireless network printing a reality.