Boy, Am I Steamed… And You Should Be, Too!

I bet you think this is going to be a rant about some application… and you’d be right. But what if I was to say that is was going to be favorable rant? It’s true. You see, I had recently begun to use the new Mac version of Steam, the online game store, where many games, once only for the PC, are making their debut on the Mac. But before I get into the games, let me talk about Steam.

Steam is a game store, an online community, a chat client and more. You can purchase new and older PC and now Mac games or games converted from PC to Mac, download them and play them right through Steam, like GameTap, which I was also at one time a member of. A Steam account is free and you are not obligated to purchase anything. Their are frequent specials, mid-week deals and outright steals. You can login from as many different machines as you wish, but have only one active session at a time. You can download the games onto as many machines as you have, but again, can only play on one machine at a time.

You can add friends, become part of groups, see and join friends playing online, and find out how much time you are wasting playing each of your games. Also, Valve has introduced the concept of Achievements, where awards are given for certain accomplishments which are kept track of and broadcasted to your friends.

The Steam client is similar to a browser, with it’s own look and feel. 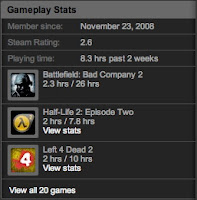 Steam is also owed by game producer Valve, so of course, their games are available here. They boast such titles as Half-Life, Half-Life 2, Left4Dead, Left4Dead2, Portal, Team Fortress 2 and Killing Floor. All of these titles with the exception of the L4D franchise are not only available for the Mac but they now support SteamCloud, which saves games online so you can access your saved games from any Steam-enabled computer.

In addition, they also support SteamPlay. That means you can play your game from any PC or Mac. That’s right. Buy it on the PC, play it on the Mac, at no extra charge. I know I am using a lot of italics here, but I am really excited. I had never played these games before, and Steam gave away free copies of Portal for Mac and PC users during the release of the Steam client for Mac. So of course I downloaded it.

I am a sucker for a good puzzle game, like Myst. Combine that with physics and you have Portal. It’s a FPNS (First Person Non-Shooter) Although it plays like a FPS, there is no killing, just obstacles to overcome. You have to think your way through the various challenges, but it requires action to extricate yourself. Graphics are great and the storyline is good. Toss in some quirky humor and ta-da! Instant hit.

The gameplay, depth of story, graphics are all top-notch. They keep you intrigued and entertained throughout. Although I played them backwards, I found that having already played Portal, I better understood how the game was to be played. Maybe that’s a cheat, I don’t know, but it certainly helped me to enjoy the game more. The Episodes are part of trilogy and I am stuck at the end of Episode 2. Episode 3 is expected… sometime.

For all you retro and OS 9 gamers out there, remember all those games you like, but no longer work under OS X? Well, if they are on Steam, they do now. Games like The Dig, Loom, Indiana Jones and the Fate of Atlantis, Indiana Jones and the Last Crusade, all work under Steam. No need for keeping ancient computers or old CDs (and floppies). Have some blocky, bit-mapped fun! Graphics aren’t as good but sometimes that forces the story to be better!

All in all, if you like games, Steam is a must-have.