A Marvelous Night for a Vertical Moon

This is the second installment of my review of the products from Vertical Moon. This one covers their Flash slide-show building application, SWF ‘n’ Slide Pro.

Everyone is using Flash these days. And just about 99% of the browsers out there support some version of it. But everyone is not a Flash programmer. Yes, Adobe Flash has a slide show object built into the application, but it’s very basic. I want to do cool things like different transitions and layouts and images that link to other sites. SWF ‘n’ Slide Pro (SNS) does it all and then some. And get this — no programming. 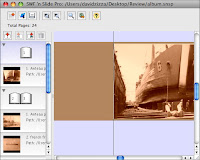 SNS has much appreciated support for Drag and Drop from the Desktop or iPhoto. It also sports seven different layouts including Album, which has a page turning effect, an Image Strip (horizontal scrolling images) with and without mouse view (a feature that allows mouse control of direction and momentum), Strip View (that has horizontal scrolling thumb nails you click on to display enlargements) with and without mouse scroll, a Simple slide show and a simple Strip Show (maybe I should rephrase that). 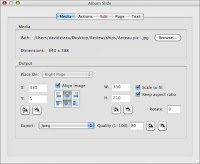 There are a multitude of customizable features, and I mean multitude. In fact, there are so many, with some applying to individual slides or the entire show, that it can easily get confusing. The options are split into two tabbed windows, one for the show and one for the slides and that does help, but maybe a strategic use of icons or mini-animations would be a just the way to aid the user. Some of the key features are adding sound, captions, adding URL links to photos, linking the slide show to other SWF files or HTML pages, and support for a bunch of transition and image filter effects.

There have only been minor patches and no real significant updates since 2006, which means the interface is getting a little long in the tooth, but it’s still very functional. It would be nice if they reorganized the interface for easier use and conservation of screen space. I don’t have a problem with a 24″ display, but others might. No support for Default Folder, which means you have to constantly navigate the Open and Save dialog boxes – annoying as heck. Uses the SWF Player 8.0 for file previews and we’re on version 10.0 – it’s not even Universal Binary, the preview player, that is, the SNS application is, however.

So, my conclusion? A great little app, with minor interface issues and for $65.00 gives you the ability to create Flash slideshows in minutes with no programming. That alone will save you huge amounts of time and if you’re doing this for a living, time is money. You can recoop the cost in one job alone. You can see a sample of my use of the program on action here.